Compositions from drypoint etching, metal and wood types, and collagraphs.

Nothing makes a better impression.

Image Description: A fiery, symmetrical triangular area with a dark center with figures that are silhouettes at top and bottom. A drawing like treatment over red on the figures, some of which hold signs. The figures at the top are upside down and feature an umbrella holder protecting from tear gas. A rectangular city-like horizon at top and bottom between figures and fire. The names of only a few killed by police surround the print in gray.

Shared for the first time on the night George P. Floyd’s murderer was convicted on all counts. I am heartbroken, angry and so sad to learn that as this verdict was handed down, Makiyah Bryant, a 16 yr old Black girl in Ohio was murdered by the cops she called for help.

I stared into the summer campfires, taking pictures with a filter on Instagram that divided the fire in symmetry. What was this burning heart? I realized it was like staring into our collective grief over the summer of 2020 when ordinary people took to the streets and became activists, holding signs and confronting murderers, defending against chemical weapons with umbrellas, strategizing to outmaneuver police, or whole families bravely marching in their communities for justice. And getting hurt.

I will add this to the shop soon. 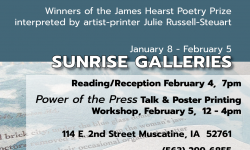 On Friday, Oct. 8, 2021 an Iowa Covid Memorial display of 7,000 (6,684 was official number of Iowans lost to Covid) white flags similar to the one that had just been displayed on the National Mall was on the lawn at the Iowa Capitol for the day. The pop-up event was hosted by the group of moms, Science for Safe Schools, who in August had organized the Safe at School Sit-In to protest the dangerous mask mandate ban, which prevented school districts from mandating masks. Artist/Activist Julie Russell-Steuart is part of this group, in her role as Chair of the Iowa Democratic Party Disability Caucus, advocating for kids and families with disabilities. The Sit-In event with 160 attendees on a record breaking hot Wednesday morning was widely covered in the media, including nationally. And Governor Reynolds was forced to respond. Julie’s narrative of the Sit-In can be found here on Bleeding Heartland.

The group also delivered this petition to the Governors office, and added 200 pages of studies collected by Michelle Breitwisch, group member and pharmacist, that prove Covid mitigation tools like masks work. Governor Reynolds had repeatedly claimed not to have the “Data” on masking.

The artist hosted a Pop-Up Poster Printing at the Iowa Covid Memorial as part of her Artist Resilience Grant activity, funded by the Iowa Arts Council and the National Endowment fro the Arts. She brought her small proof press and worked with children to create posters on the fly with wood type from the late 1800s. This was the first time the press was used; it got a christening with the inky blue hands and the boundless curiosity of the children, and that was all right. Bella, disability activist Erin Dahl’s daughter, was a natural printer, and quickly fell into the process of setting type, locking up (think puzzles!) inking, and pulling a print.

Let us create for you.

We'd love to help! Shoot us a message via the contact form.