Home Letterpress Caveworks Press publishes Martín Espada’s poem, “How We Could Have Lived or Died This Way.”

Caveworks Press publishes Martín Espada’s poem, “How We Could Have Lived or Died This Way.” 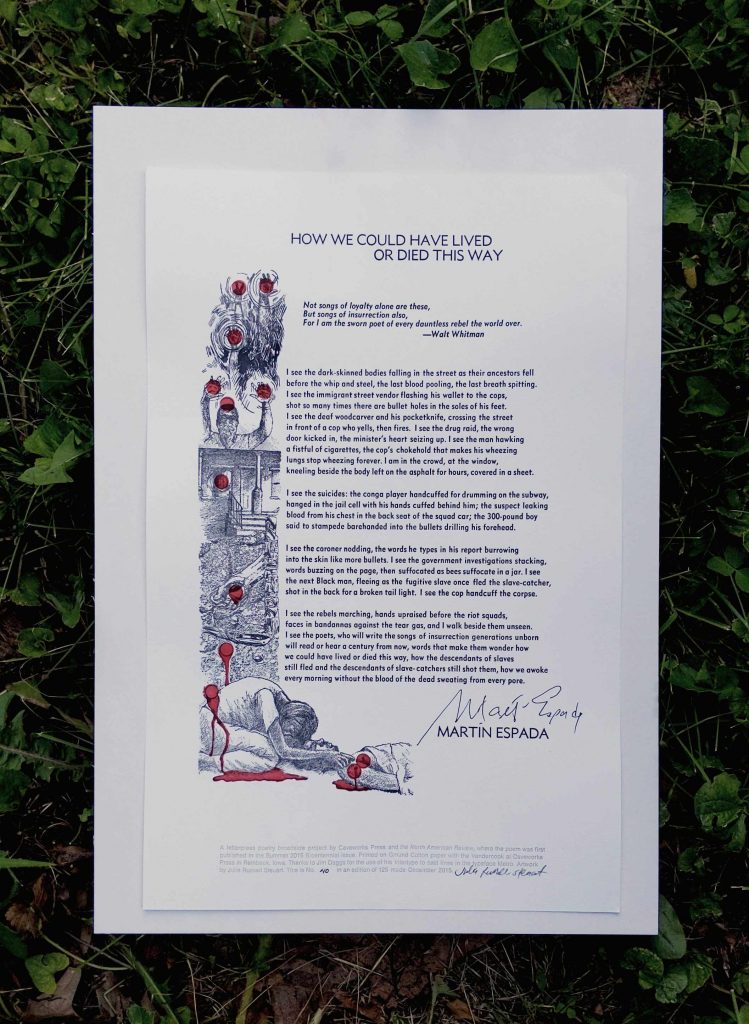 In preparing to illustrate and produce the poetry broadside, I researched the stories, looked at many many images, felt stabs of pain when I continue to read of the injustices perpetrated by officers and unknown arsonists burning down churches. Indeed, I spent time in mourning for those killed by hate and fear. At times it was hard to see life in a positive way. Stepping back, I tried to examine the best way to approach illustrating. I wanted to bring my first love, drawing, and marry it to my current endeavor, which is letterpress printing. I also wanted to go back to drawing people, which is how I discovered I wanted to be an artist. In a sense it was a way to get to know someone. These days, I tend to be more conventional when getting to know someone! But back in the day when my hearing loss was more of a handicap, art was a powerful form of expression and reaching out. But I digress..

Essentially, there were some stories I plucked out to become images. There are so many potentially violent scenes within the poem, that I wanted to be careful of seeming to sensationalize them.  At the top of the illustration, we have the marcher’s hands. Hands are actually an important symbol in my personal imagery; it is easy for me to choose them, I think they have great universal emotional appeal. A Black man has the bandanna on his face, and arms raised in the “Don’t shoot” position. Underneath, we have the kicked-in door on a rowhouse building where the minister was, which is a double housing unit and very easily could have been mistaken for the next door over. The source image for this is from Baltimore. I grew up in MD and lived in Baltimore for part of high school and for college (Maryland Institute College of Art.) I am familiar with the urban unrest in that city. Underneath that is the hand of the woodcutter on the asphalt and the carving knife nearby, as well as the totem pole (finished image) of what he may have been carving. I used an image of a totem pole that his brother actually did.

The bottom image is a kneeling figure over a man under a sheet. But I did not keep him covered. You see his face. To me this brings the narrator (not gendered) suddenly to the forefront, as in “I am in the crowd, at the window, kneeling beside the body…” and brings home the feeling of identification that the reader may have with the narrator, so that the feeling of the poem is conveyed, So that the reader is encouraged to place oneself in the poem, to understand the grief and injustice felt. And further, realize that THIS poem, THIS broadside illustration printed on archival paper, these WORDS will have a long life that we can only guess at now. That they are indeed part of a long chain of “dauntless rebels.” That is what I hope. Thank you for allowing me to be part of your work.

The full text of the poem can be viewed here. It is part of Espada’s most recent book, Vivas to Those Who Have Failed. 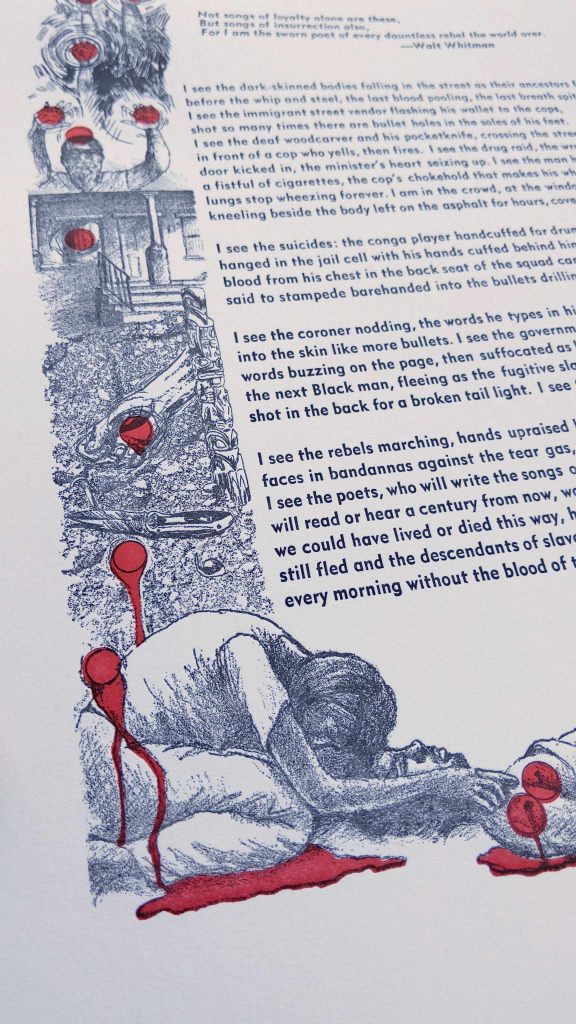